It is with great sadness that we announce the passing of Clint at his home on January 18, 2020, with his loving wife, Irene, by his side.

Clint was born in Inverness Scotland but moved to Glasgow and at the young age of 16 joined the Royal Air force for 10 years. Shortly after leaving the Air force Clint met Irene, they got married and emigrated to Canada in 1976 initially living in Richmond where Clint worked for CP Air and other airlines.

Together Clint and Irene became actively involved with various animal welfare societies and Clint appeared on numerous television and radio shows speaking on behalf of the animals. For many years he was President of the Wildlife Rescue Association of B.C., of OWL Orphaned Wildlife Rehabilitation Society, and of the Wildlife Rehabilitators Network of BC. Clint served on the Board of the Reifel Bird Sanctuary, the Vancouver SPCA and the Provincial SPCA. 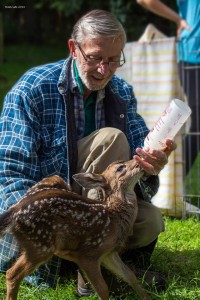 In 1988 Clint and Irene moved to the Sunshine Coast and founded the Gibsons Wildlife Rehabilitation Centre. He was shelter manager and special constable of the Sunshine Coast SPCA for seven years. In 2012 Clint was awarded the Queen’s Diamond Jubilee Medal in recognition of his spirit of “volunteerism and compassion” working with domestic and wild creatures.

Apart from his work helping animals, Clint’s hobby was carving beautiful soapstone animals and birds and he was a talented animal portrait artist, working in a variety of media – oils, graphite, pen and ink, and scratch-board.

Clint leaves to mourn his beloved wife, Irene, his sister-in-law Marilyn Scott in Scotland and Aunt Millie Lipman in England, along with many friends. Clint had a deep compassion for animals and a special way of knowing how to help distressed wildlife when it arrived at the Centre. He will be remembered for his quiet gentle ways and will be sorely missed by many. Special thanks to Dr. Ben Bauer for his care of Clint over the last few months and to Leroy McLellan for his support and for being there when he was needed most.

There will be a huge furry and feathered gathering in heaven, Clint, anxious to see you again!