When we received a call about a trapped raccoon we were concerned it was another raccoon caught in a leg-hold trap. This was not the case, this time the raccoon was trapped by nature. It had somehow managed to get one of its back legs caught between the split of two tree trunks. 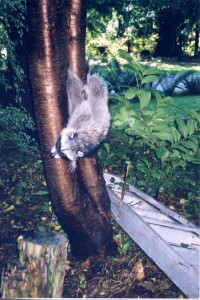 How were we going to free him? As the raccoon was hanging by the leg, Clint’s immediate thought was to take the raccoon’s weight from the trapped leg, so he found a plank of wood and put it under the raccoon and placed a cage in front of it. Once the raccoon was no longer hanging by its leg, it calmed down and Clint was able to go behind the tree and lever the leg up between the two tree trunks and thus release it.

The raccoon immediately ran into the cage which we quickly closed behind him. We checked its leg. It was not broken and there was no bleeding, although it was a bit swollen, but the raccoon was standing on the leg and we decided it best to set it free. We carried the cage into the woods and released a very happy raccoon who ran off, using all four legs, and soon disappeared amongst some bushes.

When we received a call about a raccoon with its paw caught in a leg-hold trap, we immediately drove to the location. The trap, which had been illegally set, could only be seen from the water and luckily a boater had spotted it. It was underneath a derelict walkway approximately 15ft up from the water. Clint carefully edged his way along the rotten wooden walkway and rocks and eventually reached the terrified raccoon. Carefully he released the trap from its swollen paw and put the raccoon into a cage. We examined the raccoon’s paw and although swollen it was not cut, so decided it best to release him.

Leg-hold traps inhumanely kill thousands of fur bearing animals every year. If you are against this cruel treatment of our wildlife, and would like further information please contact
The Fur-Bearers at http://www.banlegholdtraps.com.

“Stinky Minky” was brought to us after he was found in a ditch. His mother and two siblings were lying dead on the road. We estimated the young mink to be around 6-8 weeks old. Initially we put him in a large cage in one of our indoor “open” rooms but soon found the only place this little creature could stay (and allow us to breathe fresh air) was in our bathroom with the fan on! Stinky Minky was aptly named! We had never raised a mink before and he was a very interesting little animal. He ravenously ate his food and loved to shred the sheet covering part of his cage after pulling it into the cage. He hid under the towels we put in the bottom of the cage and, as he grew older, would rush and hiss at anyone daring to put their fingers close to the cage.

After a few weeks, Stinky Minky was transferred outside into our squirrel house (minus the squirrels) where he had lots of fun running up and down the planks of wood and playing under the branches and leaves on the floor. Two months after he arrived, it was time to release the mink back into the wild and we let him go close to where he had been found. The minute his cage was opened, Stinky Minky dashed out and in seconds disappeared under thick undergrowth, without stopping to say goodbye!

When an old tree on Keats Island was in danger of falling, it was cut down. Unfortunately, after it had fallen and split in two, a pileated woodpecker’s nest was discovered. One of the nestlings died in the fall but the other was still alive so was brought by boat to Gibsons and then to us.

Clint made an artificial “nest cavity” for him with parts of a log. When Woody became used to his new home and to being hand-fed, he would pop up out of the hole to be fed and then disappear back down it! When he was old enough to be transferred to a larger aviary, large logs were placed upright and he delighted in flying from one to the other and then destroying them with his constant pecking. Soon he outgrew (and partially destroyed) the inside aviary and was transferred to our squirrel house in the woods at the back of the property (it was empty at the time!). There he had lots of room to fly and we had our very own sawmill! By the time he was ready for release there was 6” of woodchips covering the floor! Woody was taken back to Keats Island on a sunny afternoon and Clint and one of our volunteers had the pleasure of seeing him fly back into his wild home. Goodbye, Woody, we enjoyed having you with us!

When boys found a nestling killdeer they took it to the SPCA from where it was transferred to us. Unfortunately, the killdeer should never have been picked up. It was uninjured and healthy but only a few days old.

As killdeer nest in a shallow depression on the ground, the boys obviously did not know that its parents were probably nearby. Killdeer are not the easiest of birds to raise, however, we are pleased to report that we did successfully raise this little one and on a bright, sunny day, we released him at Sargents Bay.